Us sailors are a unique breed. While families around the world get together to celebrate, we can usually be found either at sea – or preparing to go to sea. However, don’t feel sorry for us, it’s what we love doing! 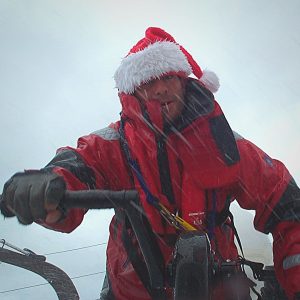 I’ve spent three Christmas days at sea, all in the Southern Ocean, but during different events. The most memorable was during the Vendee Globe in 2004-5 because my generator decided to pack up just ahead of a nasty depression that was bearing down on me at a rate of knots. I managed to enjoy lunch and open a few presents, before heading on deck to take a reef and change to my fractional code 5.

I took a few pictures outside, one of which made it onto the front page of L’Equipe of me on the grinder with water dripping off my face.

That night, I spoke live on Sky News. That was the last live I would do on the race as the following day, Boxing Day a huge earthquake created a massive Tsunami that decimated South East Asia. Whilst I was safely in the Lee of Australia, the Tsunami caused widespread damage and tremendous loss of life. I only found out the true extent once the race had finished.

That night as the breeze built, I finally overhauled the backmarker and was no longer in last place after my pit stop in Cape Town to fix a broken rudder. Huge relief to finally have a boat behind me. 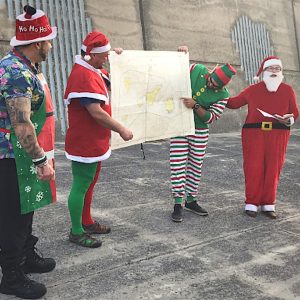 Personally, I love Christmas with all its bells and whistles. When I’m away at work onboard Tenacious over the festive period, I have the best of both worlds – a traditional Christmas but with sailing and sunshine!

Christmas time onboard Tenacious is great fun, all hands are involved in decorating the ship and preparing the dinner for the big day itself. However, in the tradition of the JST the ship’s officers will serve the crew and do the washing up afterwards, always an advantage!

People can be concerned that Santa may not find them on Christmas Eve. Don’t worry, there’s nothing to worry about on that score, Santa loves seafarers and always makes a detour to visit us. He arrives through the hawse pipe though as we don’t have a chimney…

There is always a family atmosphere onboard Tenacious, but especially so at Christmas time. We remember friends and family who may not be present but cherish the time with our shipmates with whom we’re spending this special time of year.

Boxing day means it’s time to get underway again and continue the adventure, but this may not mean an early start. There will perhaps be time to have a boxing day swim before sailing off to wherever the winds take us. I think that beats boxing day on the sofa don’t you? 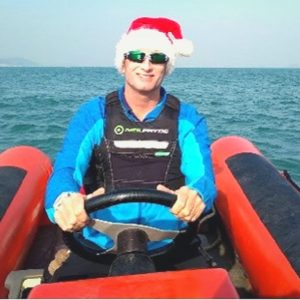 Christmas is a very special time of year for many people and no doubt this year will be very different for some. Traditionally I have spent the day eating far too much food with family before going racing the following day (Boxing day) to try and use up all those negative calories!!

When negotiating my contract with the Chinese Yachting Association I made the case of assuming that there would be more rest days. These are necessary both for the physical training (it is actually during the recovery that you get fitter/strong and overtraining can actually lead to a decrease in fitness) and for the mental training you also need a break, so as to avoid a mental burn out, but with so many athletes and slightly different programmes there were no days off for Jon.
So perhaps it was no surprise that I ended up coaching Lijia on Christmas day in 2011 during her Olympic Gold medal winning campaign. After all, every day of training counts. That day we worked 1:1 doing an extremely effective training session and (by luck) the wind was perfect.

Fast forward a few years and the Vanhang Sailing Academy has been fantastic at getting Chinese youngsters on the water. For me, this time there was no surprise when we hit the water on Christmas day. I even made sure that I was appropriately dressed! 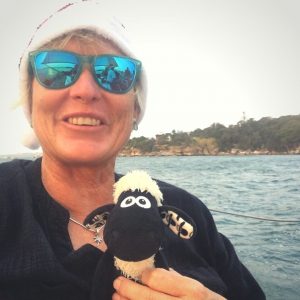 For the last 13 years I have been sailing south on Boxing Day as part of the Sydney Hobart race. However, last year was a bit different as the race was cancelled for the first time in its 76-year history.

My family don’t live close by in Sydney so it’s just not possible to spend it with them, so we always try to have an early Christmas, or a camping trip, to make up for not being together.

For the last few years, I have spent Christmas Day with 2 of my closest friends, Jules and Russ. Out of the 3 of us 2 of us are doing Hobart. So, we are always aware of what will be going on the next day.

A few years ago, Russ was given a beautiful wooden boat, and this is where we spend our Christmas Day, on the most beautiful harbour. We catch up with other friends out on the water, swim, eat and have a few champers.

At the end of the day, we end up back to the CYCA (the home of the Rolex Sydney to Hobart race.) there is always an awesome atmosphere with interstate and overseas crews hanging out on the decking, telling stories.

from the Kraken Team

6 “must visit” places to anchor in the Southern Caribbean

Here are our top-secret favourite spots in the Caribbean, providing the best sailing whilst avoiding the crowds.

Is Coronavirus helping the world heal?

The skies are void of aeroplanes, the water in Venice's canals is clear and mountain goats have taken over the Welsh village of Llandudno.