A Kraken guide to cruising the BVI

The British Virgin Islands (BVI for short) has long since been a hotspot for sailors. With the perfect mix of tropical sun, incredible snorkelling, mindblowing marine wildlife, fantastic local nightlife and easy, trade wind filled, line-of-sight sailing, it’s not hard to see why the islands are so popular. 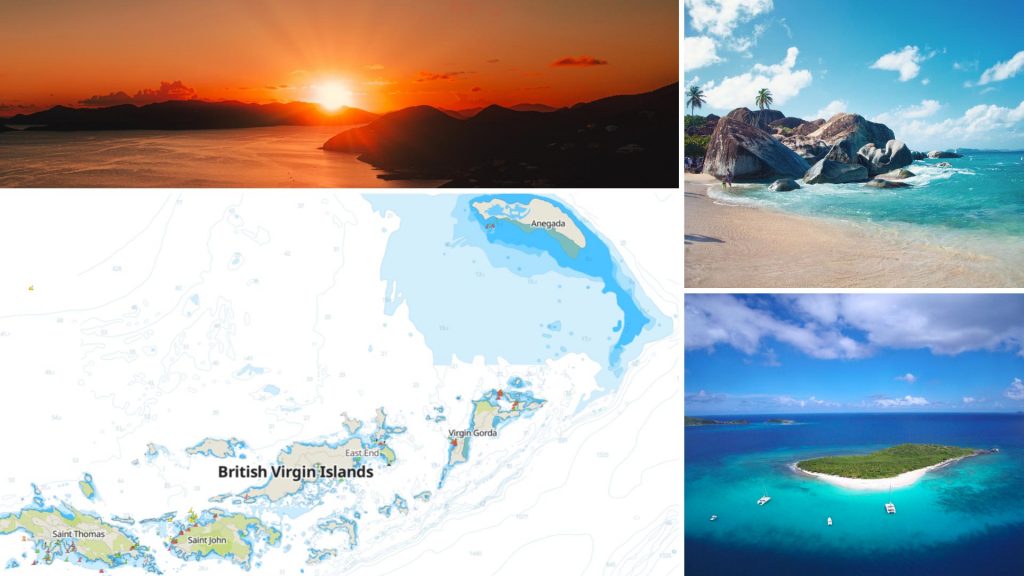 Cruising these waters is always a true pleasure and there are plenty of sights to see and things to do to please each and every sailor (and landlubber) alike. Our 7-day itinerary aims to give a mix of adventure, liming (relaxing is local speak) and great social experiences. So, here’s our rundown on how to spend a week sailing in the BVI. 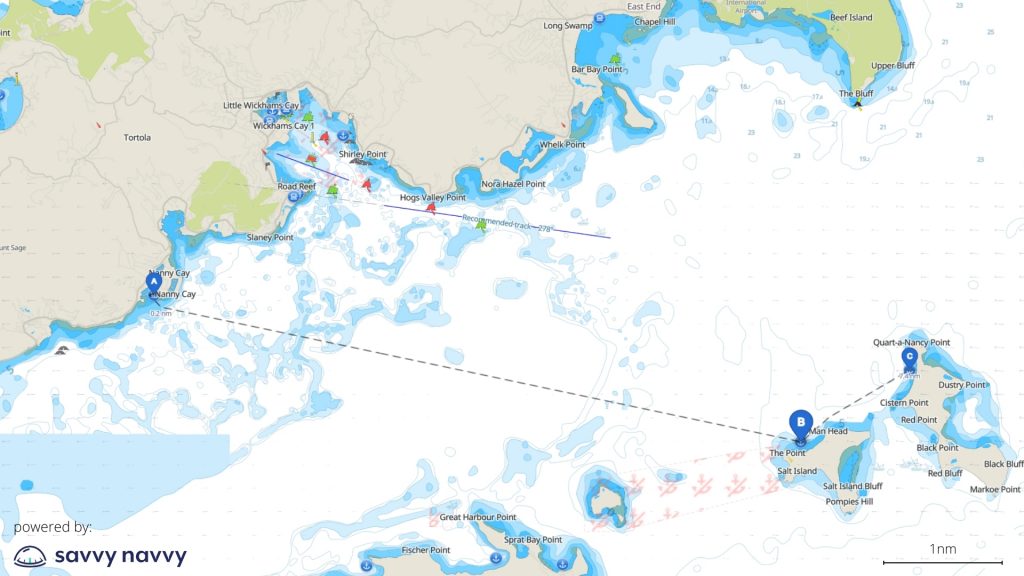 Start your charter with an easy sail but packed with adventure. First stop, just over 6nms away is Salt Island Bay. The island itself might not look out of the ordinary, but it’s what’s beneath the surface that matters. After dropping your anchor, hop in the tender and take your snorkelling kit around “The Point” and you’ll see a line of small mooring buoys. Tie up and go snorkelling. This bay is the location of the sunken RMS Rhone – a 19th Century Royal Mail steam packet. She was wrecked off the coast of Salt Island in the British Virgin Islands on 29 October 1867 in a hurricane, killing 123 people. The wreck is in shallow water, so no need for a dive tank to explore what’s left, you just need a snorkel. After snorkelling, head back to the boat and sail over to Cooper Island and enjoy an evening at the Cooper Island Beach Club, just over 1nms away! 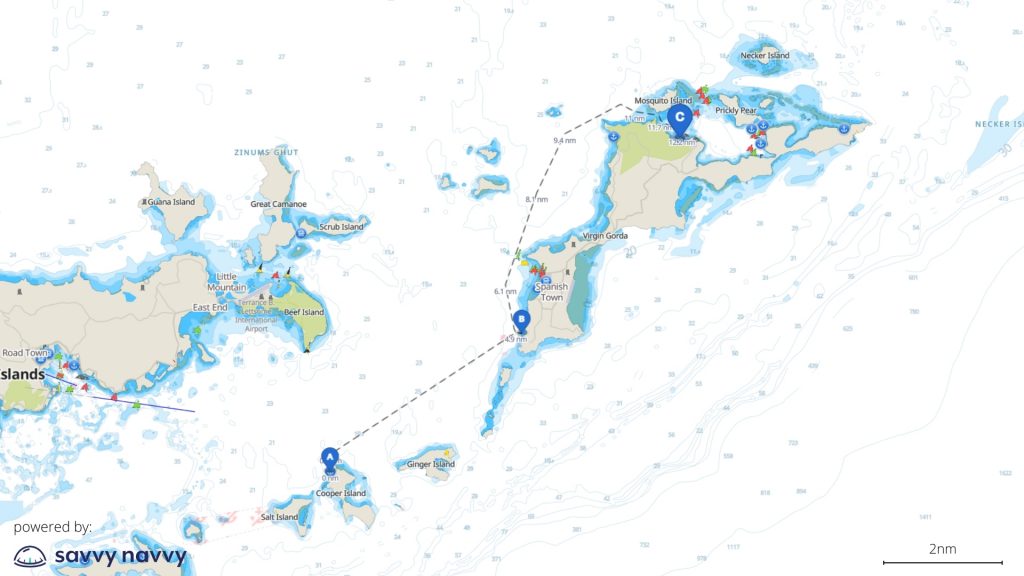 Today we’re going to up the mileage a little bit. Leave Cooper Island at sunrise and sail just 5nms to Spring Bay on the south of Virgin Gorda. Ashore here is where you’ll find the famous “Baths” – a collection of impressive granite boulders that look like they’ve been dropped on the beach by giants! As it’s one of the biggest tourist attractions in the BVI, it’s worth jumping in the tender and having a walk around them before the Instagram crowd descend around lunchtime. Back on board, it’s time for a 6nms sail to the North of the Virgin Gorda. Up here, you are spoilt for choice for evening anchorages, including Leverick Back, Prickly Pear Island and Saba Rock. 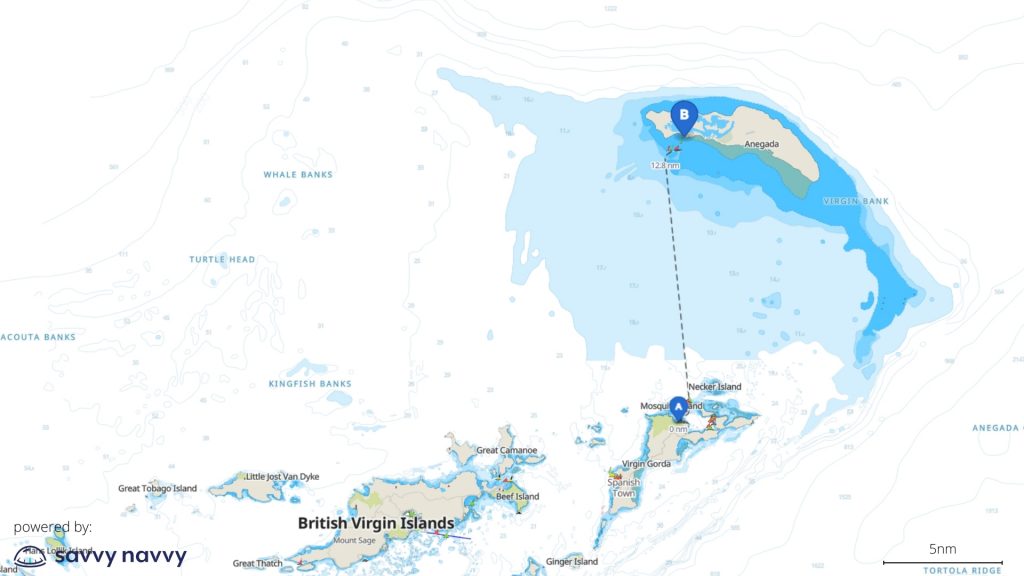 We’re heading to Anegada for the first longer passage of the charter. Again, leave early to beat the rush and catch the best spot on to anchor! The passage out of the bay can be tricky, so keep an eye on your navigation. Once clear of the reefs, you’ll pass Richard Branson’s “Necker Island” to starboard and then head North to Anegada.

Anegada is 11 miles long and unlike any other island in the BVI it’s flat!  Cooled by steady trade winds, its beaches are long and quiet. As well as being home to a flock of pink Caribbean flamingos, the island is surrounded by shallow waters, so is perfect for snorkelling. In the evening, you’ll be treated to a small selection of great bars and restaurants – Big Bamboo being one of our favourites! 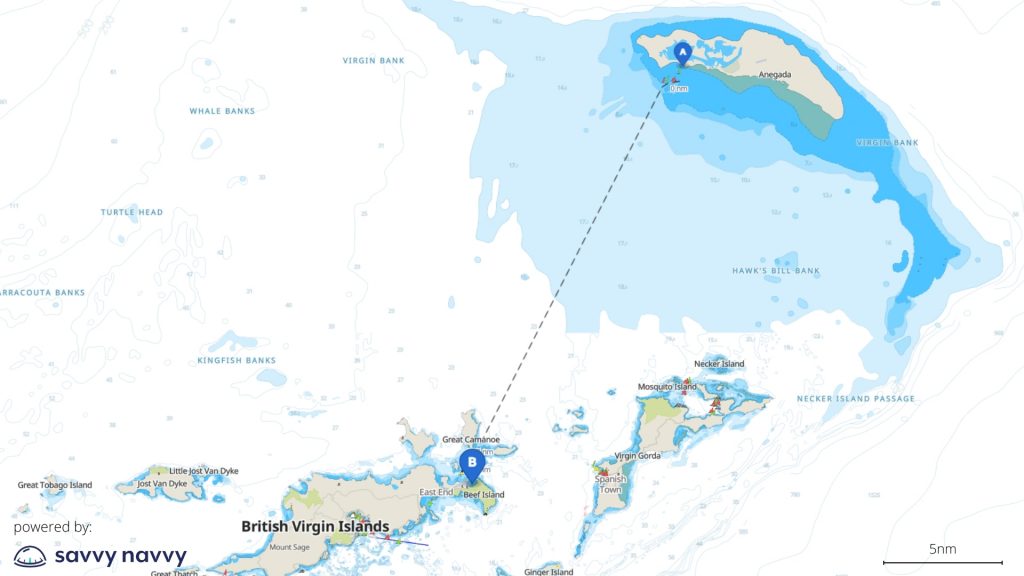 At 18nms, this is the longest passage of the charter. Heading SW, aim for the gap between Scrub Island and Great Camanoe. If you fancy staying in a marina for once, Scrub Island is a great choice, but head half a mile further on and book a berth at Pusser’s Marina Cay. This tiny island really packs a great punch. They’re well-stocked for a good mid-charter provision – and if you have a couple of Kayak or SUPs, the reef to the SE of the island is fantastic to explore. Pushing on just one more nautical mile and you’ll get to Trellis Bay. Don’t be put off that it’s at the end of the Airport Runway, the island is only served by a small number of small commercial aircraft that stop just after dark. What you’re here for though is  (if you’ve timed it perfectly) the legendary “Full Moon Party”. 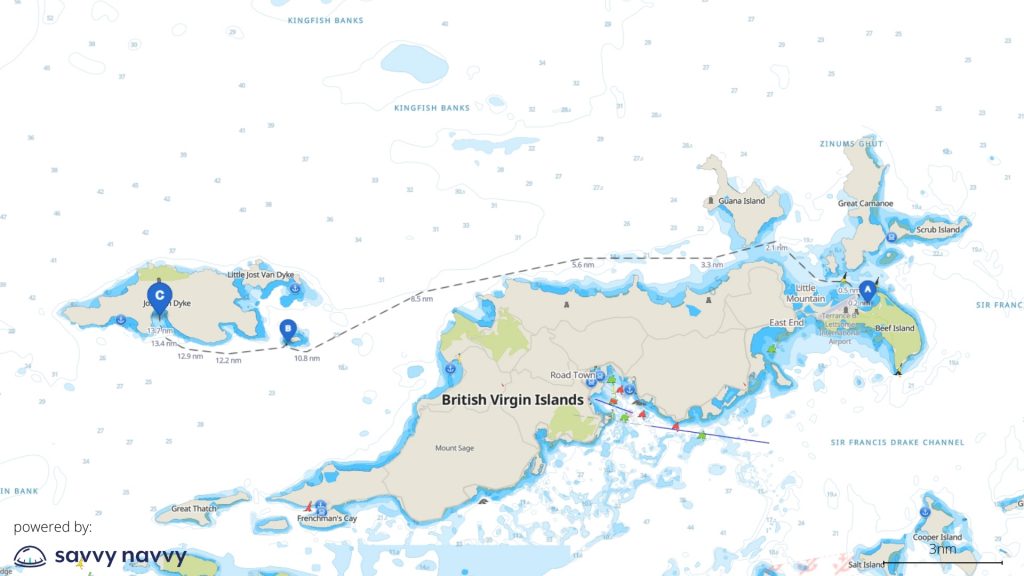 Now’s time for a real “Robinson Crusoe” moment… Leaving Trellis Bay, weave your way through the islands, corals and reefs and head downwind to Jost Van Dyke. En route to drop the hook off “Sandy Cay”. This tiny island could be straight out of any depiction of a deserted island. Anchor to the SW for the best shelter and take a tender ashore for that real marooned experience. After escaping Sandy Cay, either head to White Bay on Jost Van Dyke and grab a drink and bite to wat at the famous “Soggy Dollar Bar” (named so as you have to swim ashore to get to the bar, so your dollars are soggy when you arrive!) or alternatively, head back over to Tortola and anchor in Cane Garden Bay for an unbeatable sunset and some Reggae beats at Quito’s Gazebo. 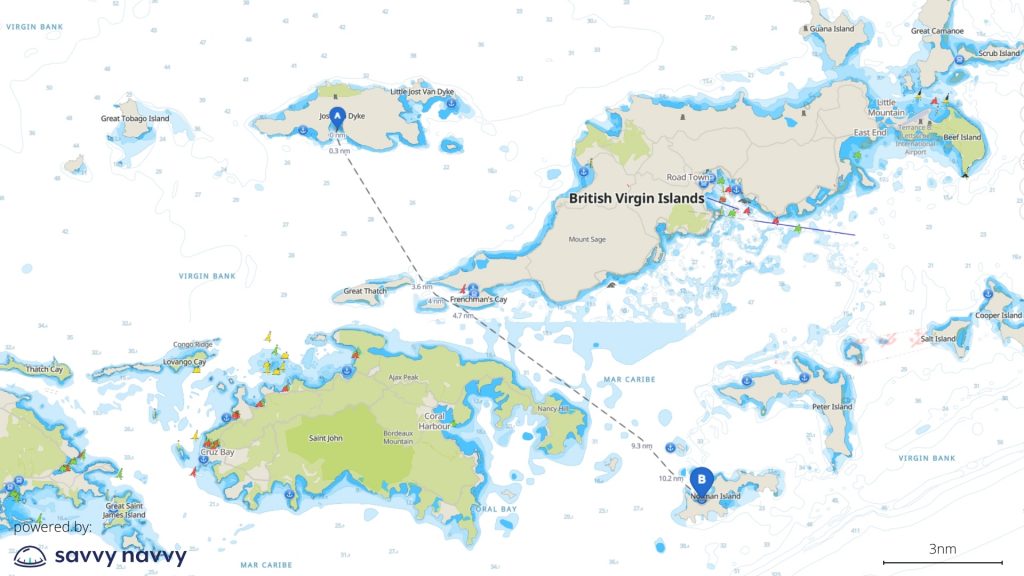 No visit to the BVI is complete without a visit to Norman Island. Just over 10nms from Jost Van Dyke, Norman Island is home to some of the best snorkelling and kayaking in the Caribbean. Make sure you have time to explore The Indians and The Caves with the Great Bight. The island is also home to the infamous “Willy T’s” floating bar. Warning, as the sun goes down, it can get a little rowdy and jumping naked off the top deck becomes common practice. If this isn’t for you, head ashore to Pirates Bight in the northern end of the bay for a more civilised send-off. 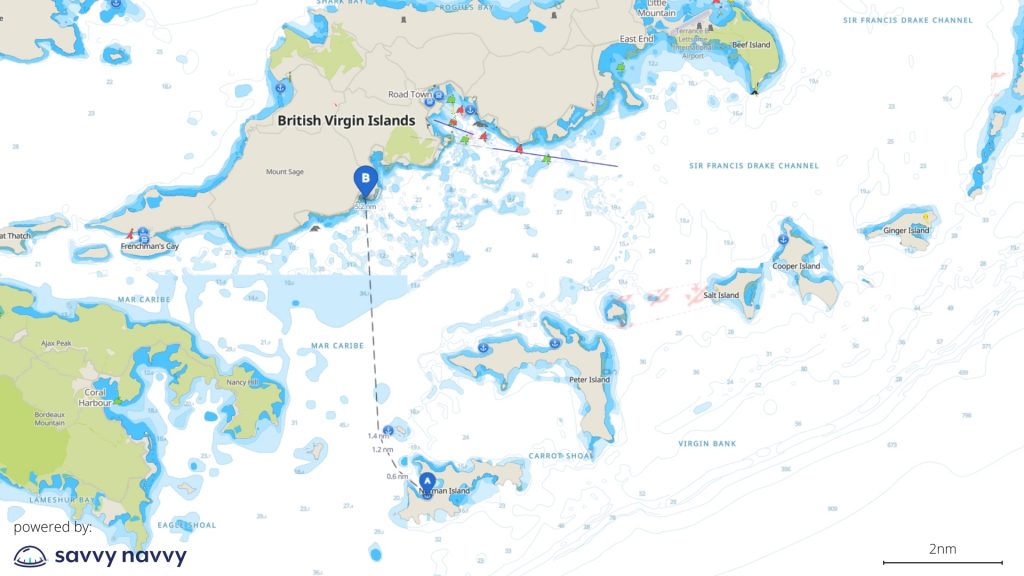 On the final day, it’s a gentle close reach back over to Nanny Cay Marina. And what a week it’s been. It’s time to put up your feet, have a massage and a pain killer cocktail before heading home.

Keen to explore more of the BVI? Get a Kraken exclusive 20% off navigation app Savvy Navvy and plot your own BVI adventure.

Want to charter in the BVI? Drop us an enquiry.

6 “must visit” places to anchor in the Southern Caribbean

Here are our top-secret favourite spots in the Caribbean, providing the best sailing whilst avoiding the crowds.

TWO BOATS, ONE CUP: America’s Cup heads to Cowes for 2022

Ineos challenge Team New Zealand to a one-off Deed of Gift match around the Isle of Wight in 2022.