One of the world’s most famous shipwrecks, The Endurance, was found by an intrepid group of explorers more than a century after it sank in the Weddell Sea.

One of the world’s most famous shipwrecks, The Endurance, was found by an intrepid group of explorers more than a century after it sank in the Weddell Sea.  Captained by the celebrated Antarctic explorer, Sir Ernest Shackleton, the ship became trapped in floating sea ice while travelling to Vahsel Bay, from where Shackleton and his crew intended to attempt the first transcontinental crossing of the Antarctic by land.

An expedition mounted by The Falklands Heritage Maritime Trust located the wreck just over 3 km below the surface of the Weddell Sea and approximately 6 kilometres from where it was slowly crushed and sunk by the floating sea ice in the notoriously glacial and dangerous Weddell sea. 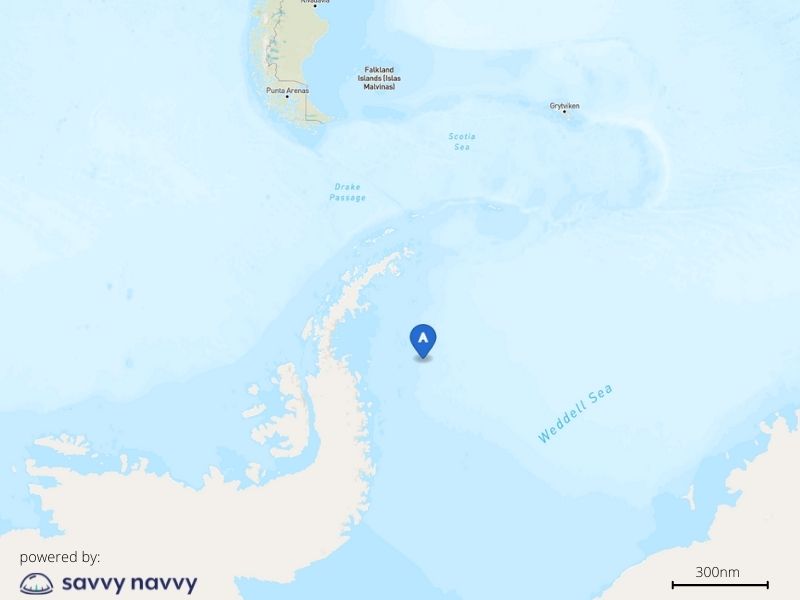 The team of researchers aboard the South African polar research vessel, SA Agulhas II, searched a 240 square kilometre area for two weeks, battling freezing temperatures and dangerous floating sea ice, before locating the legendary wreck using remote-controlled SAAB Sabertooth submersibles.  Shackleton himself referred to the site of the sinking as “the worst portion of the worst sea in the world”.


The Endurance, a 144-foot, three-masted wooden ship, holds a special place in the annals of polar exploration for its role in one of the greatest survival stories in the history of human exploration.

Ernest Shackleton and his companions abandoned the ship after it became trapped and crushed by floating sea ice.  The ship eventually sank, leaving the group of explorers to embark by boat and foot on one of the most perilous journeys ever attempted, first to the inhospitable Elephant Island and later to South Georgia Island, a British overseas territory that lies around 1,400 kilometres east of the Falkland Islands.  Every member of the expedition somehow survived the perilous journey to safety while battling freezing conditions, tropical storms and hazardous, mountainous terrain.

The Weddell Sea region remains one of the most challenging parts of the ocean to navigate.  “This has been the most complex subsea project ever undertaken,” said Nico Vincent, the mission’s subsea project manager.  Veteran polar geographer Dr John Shears describes the expedition which battled constantly shifting sea ice, blizzards and temperatures dropping to -18 degrees C as an incredible achievement.  “We have achieved what many people said was impossible.”

The wooden ship has survived mostly intact, being preserved by the icy waters where sea life may have degraded it in warmer climates.  Photos and videos taken by the submersibles show the ship in astonishing detail.

Endurance’s name is visible on the stern above a five-pointed star that formed part of the ship’s original name, Polaris.  The amazingly preserved ship looks almost identical to the photographs taken by Shackleton’s filmmaker, Frank Hurley, in 1915, with its broken masts and tangled rigging.  The hull is mostly intact, barring some damage to the bow, which likely hit the sea bed.

“Without any exaggeration, this is the finest wooden shipwreck I have ever seen – by far.  It is upright, well proud of the seabed, intact, and in a brilliant state of preservation.” Said marine archaeologist Mensun Bound in an interview with the BBC.  “You can see a porthole that is Shackleton’s cabin. At that moment, you really do feel the breath of the great man upon the back of your neck.”

The historic wreck is protected by international maritime law, meaning that nothing has been disturbed, nor have artefacts been brought to the surface.  The images and videos will be used for educational purposes, museum exhibits, and a planned documentary.

Bound continues, “We found the wreck a hundred years to the day after Shackleton’s funeral (5 March 1922). I don’t usually go with this sort of stuff at all, but this one I found a bit spooky.”  The crew of the SA Agulhas wrapped up the survey and departed for Cape Town on Tuesday the 8th of March, intending to call in on the port of South Georgia, where Shackleton is buried, to pay their respects to the famed Arctic Explorer, fondly nicknamed “The Boss”.

5 Things to do when sailing in Malta

Malta is, without a doubt, a fantastic place to go sailing. So, here are our top five things to do on a yacht when visiting these beautiful islands.