Is sailing safer than playing golf?

You cannot avoid all risk, but being aware of things around you and taking the necessary safety measures, sailing is one of the safest sports.

We are often asked how safe our sailing adventures are – and it’s a valid question. So, rather than answer it ourselves, we thought we’d put the question to someone who knows a fair bit on the subject matter of risk. Oksy is a full-time Risk Project Manager in the finance sector in London and part-time yacht racer. She started yacht racing back in 2015 and with over 6,000nms now under her belt, she last year booked the Round Ireland Race through Kraken Travel and now lists it as one of her favourite races.

Newspapers are not lying to you, so why would you think that? This is all to do with your perception of risk thanks to your caveman ancestor. Your surviving ancestor (those who died young are of no interest to us) was the one who learned that if he saw a snake near a stream, he should not go there again. Perfectly sensible strategy in the jungle, but completely useless in assessing modern risks – it makes us remember dangerous things that we think are near us.

Newspapers are in the business of selling newspapers and clickbait articles work because they appeal to your inner caveman. We remember headlines about sailing accidents because we see them in front of us. In fact, the only reason those accidents make headlines is because they are very very rare. 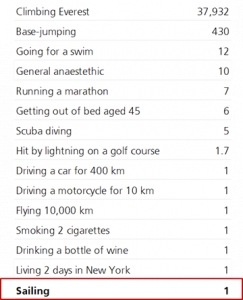 I work in Risk and I like numbers almost as much as I like sailing. There is a good practical risk assessment for a chance of accidental death: a micromort. At a very high level, this is a 1 in a million chance of you unexpectedly dying. It is equivalent to playing Russian roulette and agreeing to shoot yourself if in 20 coin tosses all 20 land as heads.

And so, for a million people going sailing, one will have an accident and die. This figure actually comes from US Coastguard and includes people who have fallen off their motorboats drunk and without a lifejacket. If you are on a boat with sails and wear a life jacket your chances of an accident are smaller still. In London, for a million cyclists – 10 will die (based on 2016 figures).

In life, like in business, there are four ways of dealing with risk: avoid, control, accept or transfer. I avoid the risks of base jumping by not doing it. I control the risks of falling overboard by clipping on. I accept the health risks when I have some rum after the race. I transfer the risks of missing my boat by having a specialist sailing insurance.

“Sailing is less dangerous than cycling around London”

How to make your sailing more eco-friendly

We have been exploring small ways we as a sailing community can make a big difference to the world, whilst still making the most out of our sailing adventures. So here are our top eco-friendly sailing tips.

Our resident risk-taker Oksy, an advocate of racing offshore and all things sailing, and a Risk Project Manager in the finance sector in London, shares her findings on this very common question...