The Royal Ocean Racing Club (RORC) and the Ocean Racing Alliance (ORA) together launch a new offshore race that will start on 21st July 2022.

The race of approximately 630 nautical miles will start and finish off in the same city, Helsinki, the Gulf of Finland. The course will incorporate the Swedish island of Gotland, located approximately 250nm southwest of Helsinki. 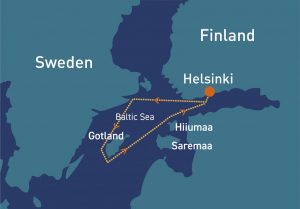 Nine countries border the Baltic Sea, and all claim a strong tradition of sailing and yacht racing – with over 5,000nm of coastline shared between Denmark, Sweden, Finland, Estonia, Latvia, Lithuania, Poland, Germany, and Russia, who can argue? The race committee is expecting strong entries from local competitors as well as regular RORC crews from across Europe.

For those new to racing in the Baltic, the Ocean Racing Alliance (ORA) was established is to create international alliances to make it possible to have longer world-class offshore races in the region. ORA’s Commodore and Class40 skipper, Ari Känsäkoski has an impressive offshore track record having competed in three Rolex Fastnet Races, the Sevenstar Round Britain & Ireland Race, the RORC Transatlantic Race and the RORC Caribbean 600: “We expect strong interest from teams participating from Finland and from all of the nations that border the Baltic Sea. The 2021 test event showed that the course for the RORC Baltic Sea Race is very interesting,” commented Känsäkoski. “The course is very strategic with land influences in the Gulf of Finland and around Gotland. In addition, it is basically on a windward-leeward axis, so we expect tactical decisions on which side of the course to choose, as well as managing wind shifts.”

With daylight and twilight perpetuating 20 hours a day in July, the Baltic is a truly magical place to sail. The summer months bring a steady 8-10 knots of wind from the west-southwest and whilst summer storms are very rare, conditions can change dramatically due to squalls and thermal activity. All of this makes for a fantastic stretch of water to race on.

We’re currently working on launching a range of contrasting campaigns for this inaugural race. Make sure you’re the first to join a crew and get on the waiting list for the brand new RORC Baltic Sea Race 2022 by filling in the form below:

Try one of these

On this stunning tour of Norway, you'll weave in and out of picture perfect islands, each one beautiful and unique in its own way.

Discover the secret islands of Mauritius, home to idyllic beaches, and so much wildlife to be seen along the way

Race your way across the North Sea on a Volvo 70!

Experience the thrill of sailing on a high-performance Volvo Open 70 from St Tropez to Malta.

Subscribe to our newsletter to stay informed about Performance and Racing events as and when they are released.